Ohio BOLD: A Blueprint for Accelerating the Innovation Economy

A Call to Action

Innovation is the key driver of economic growth (Figure ES-1)—leading to high-quality jobs and rising standards of living. As the World Economic Forum in its highly touted Global Competitiveness Report explains:

In the long run, standards of living can be expanded only by technological innovation ... This requires an environment that is conducive to innovative activity, supported by both the public and the private sectors.

Understanding the importance of advancing innovation to help ensure economic prosperity, the State of Ohio has a long history of investing significant resources in innovation-based investments that have helped strengthen the state’s key economic industrial drivers. Beginning in the 1980s with investments in the Thomas Edison Program and continuing through today with investments in both the Ohio Third Frontier and JobsOhio, the state has been heralded by many as a pioneer in innovation-based economic development. 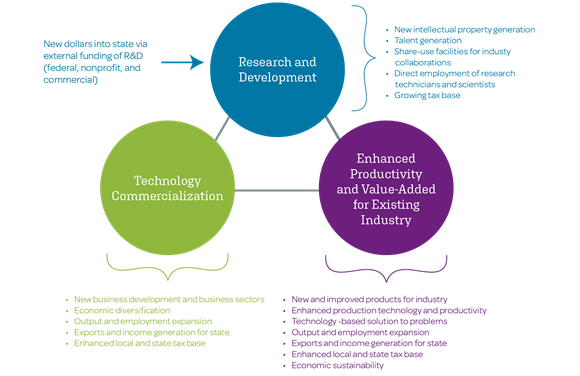 However, there is great concern that the past decades’ economic success may have been part of a nonsustainable bubble, hiding the fact that Ohio’s economic competitive strength was being eroded by changing economic drivers, including outsourcing, declining real-dollar investment in domestic research and development (R&D), and the rise of a new breed of technology-savvy global competitors. In this fast-paced, global economic paradigm, innovation initiatives are no longer just an important endeavor, but an absolute necessity for the state’s economic competitiveness moving forward. In an interesting paradox, the more global and integrated the economy becomes, the more local R&D know-how, entrepreneurial culture, workforce skills, and manufacturing competencies matter for economic success. Even with Ohio’s proactive stance in cutting-edge innovation and economic development initiatives, global competition and continued technological advancements requires Ohio to embrace new paradigms to ensure its investments are impactful and far reaching.

Today, Ohio’s citizens are concerned that the state’s economy is not as strong as it needs to be and, as a result, is falling behind the nation and competitor states. Since 1968, often thought to be the height of the industrial economy, Ohio’s gross domestic product (GDP) per capita (a leading indicator of a region’s standard of living) has remained stagnant while the nation’s continues to increase, indicating that Ohio is losing ground.

As innovation’s role in driving economic growth continues to increase, Ohio’s economy falls further behind. Ohio’s private sector average annual GDP growth rate from 1991–2016 was 6.7 percent compared with the U.S. average annual GDP growth rate of 8.8 percent—behind by more than 2 percent per year over the 26-year period. This slower economic pace, directly or indirectly, manifests itself in the following:

These key economic indicators are of grave concern to key thought leaders across the State of Ohio. Recognizing the opportunity to rethink strategic public policy initiatives in light of a new administration coming into office, the Ohio Chamber of Commerce Research Foundation, in partnership with regional Chambers of Commerce, commissioned this study to develop a blueprint for public policies that will help secure Ohio’s position as a leader in the tech-based/innovation economy.

The State of Ohio has a critical role to play in ensuring its innovation ecosystem is structured to leverage disruptive change and adapt to it. To accelerate Ohio’s economy, it is proposed that the state focus its innovation investments on three strategic priorities. The emphasis should be on leveraging and complementing existing efforts while catalyzing long-term economic growth across the state. Specifically, the three strategies should focus on the following: 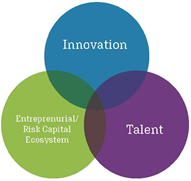 The primary recommendation is that Ohio should create four statewide Innovation Hubs that address the full innovation ecosystem of needs by advancing and deploying cutting-edge innovation within the opportunity platforms. This statewide organizational approach to pursuing strategic innovation opportunities offers the advantage of supporting strategic areas of innovation, while bringing together numerous industrial partners, public and private research institutions, and the public sector in a unique partnership to advance Ohio’s economy.

While Ohio has already made significant investments in a number of these innovation platforms, the activities are often not connected nor of a scale to have statewide impact. The proposed Innovation Hubs will work statewide to leverage these disparate efforts to develop critical mass and statewide relevance. The statewide Innovation Hubs will focus on “industry-facing” activities and specialized shared-use facilities to advance new product development, process improvements, and commercialization of new technologies through active connections to serial entrepreneurs, angel investors, and seed-stage venture capital funds. By focusing on specific areas of innovation that are relevant to large sectors of Ohio’s industrial economy and encompasses numerous projects and organizations, these targeted development initiatives will accomplish the following: 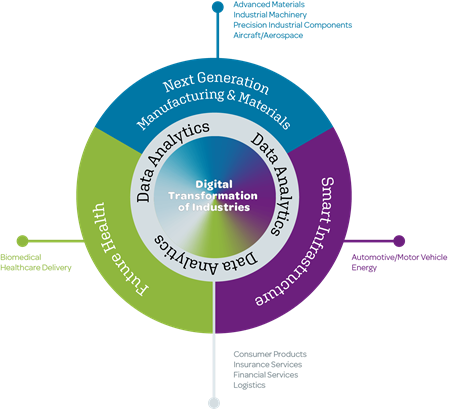 The four innovation platforms demonstrate opportunities for convergence in the ways they interact with one another to create combination technology solutions, driven by the underlying digitization of industries.

To continue reading the report, check out the executive summary.